With the latest tests at some areas of Wausau’s Riverside Park showing toxic compounds, possible remediation measures depend on their review by the state’s Department of Natural Resources (DNR), city officials said Monday.

Director of Public Works and Utilities Eric Lindman, in his briefing to the Parks and Recreation Committee, said the city will consult with the DNR and REI, a local engineering firm that conducted the tests.

“We’ll discuss if we require any more sampling and then start discussing what the next steps are – sort of remediation measures – and what they (DNR) are going to require,” Lindman said.

Responding to committee chair Pat Peckam’s questions on whether the remediation measures could begin this year, the public works and utilities director expressed his doubt on that timeline. The state agency can take 60 days to respond, he said, but in this case he expects a response next month. After that, city officials will form a plan and call for bids.

“That means next year,” Lindman said.

The tests were conducted by REI, which sent the test results to DNR on Monday. The DNR would also have to decide if any additional tests are required in Riverside Park. That could delay remediation steps that residents in the area have been fighting for a long time.

Lindman told the Parks and Recreation Committee members that the DNR will determine whether the contamination is definitively linked to a private entity. Lindman told Wausau Pilot & Review that the highest levels of dioxin contaminants were detected in or near a culvert in the park, exceeding the DNR’s allowable standards.

The residents living in homes near Riverside Park, including along Thomas Street, have long been asking for adequate testing to determine if the park is safe. Soil tests at the park last year confirmed the contamination.

Alder Tom Kilian, who spent years fighting for testing and remediation measures in the Thomas Street neighborhood, praised the latest efforts from the Public Works and Utilities at the Parks and Recreation meeting.

“We now have considerably more data on the extent and nature of the dioxin and furan soil contamination on the west side of Riverside Park, and appear to be one step closer to its ultimate remediation,” Kilian later told Wausau Pilot & Review. “I look forward to hearing the update from Lindman next month and the DNR’s response to the most recent results and mapping after it has had time to review them.” 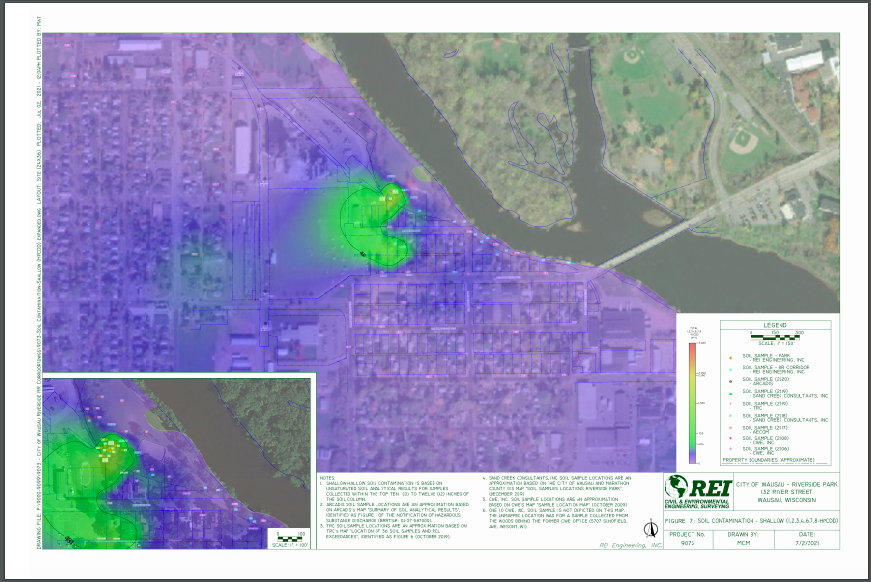 By Shereen Siewert The results of an environmental study released in January show significant contamination at the site of a former wood processing plant, a city-owned property once operated by a business investigated by the state […]

By Shereen Siewert City of Wausau officials issued a news release Thursday declaring a west side park safe for the public, but the proclamation is being made before results from recent independent testing have been issued. […]

By Shereen Siewert Members of a grassroots environmental group will move forward on independent soil tests in Wausau’s Riverside Park at their own expense, after being granted approval Tuesday by the Wausau City Council. The Citizens […]