Super Late Model Notes: Justin Mondeik won his third straight feature this season, getting by Brock Heinrich with 10 laps left and  winning the 60-lap feature last time out on July 1 on Dave Lashua Memorial night… After some bumpy results early, Mondeik has hit  a roll of late, also taking two features up at Norway Speedway in Michigan and another at Golden Sands Speedway in recent weeks…  Heinrich has four top-three finishes and no feature finish worse than fourth, and he remains the lone driver to finish in the top five in

all five SLM features this year at State Park… John Beale made his first appearance of the season at the track and was second-quick est in qualifying and finished third in the feature… Nathan Steif won a super late model race for the first time, taking the first heat…  Michael (Buddy) Kofoid made his first trip to the track and won the second heat race before finishing 10th in the feature. Kofoid has  relocated from California to the Midwest to race this summer on dirt and pavement and drove a car for Minnesota super late model  driver Dan Fredrickson… Justin Woller also made his first visit back to SPS in years. Woller is the son of former track champion Don  Woller and himself is a former street stock and limited late model racer at State Park who now lives in the Appleton area and races at  Wisconsin International Raceway.

Pure Stock Notes: Alex Volm continued his and the Volm family’s mastery of the Dave Lashua Memorial, winning the race for the  third straight year last time out. Volm and Jeff Spatz raced side-by-side for the lead for 10 laps before Volm finally made the pass on  the outside coming to the white flag and went on to win the 25-lapper… Volms have won all five runnings of the Lashua Memorial,  with Alex’s cousin Travis Volm winning the first two races in 2017 and 2018… Mitch Stankowski also got past Spatz on the final lap,  and he continued a run of very strong and oh-so-close runs by finishing second for the third straight week… Dave Trute made his  first visit to State Park in several years and was strong, winning a heat race and finishing third in the feature. Trute is a regular at  Dells Raceway Park, where he is the defending hobby stocks champion and leads the point standings this season… Ken Scott also  made his first-ever visit, coming up from Rio near the Columbus area and finishing third in the first heat and ninth in the feature.

Mini Stock Notes: Eric Breitenfeldt has been the dominant driver in the class this year and in the most recent race July 1st he  won his fourth feature in five races, coming from the back after setting fast time and passing Ashley Schoone for the lead on lap 12.  Breitenfeldt has now won seven of the last 10 features in the class in points races dating back to last July… Defending champion  Garret Strachota finished second to Breitenfeldt and continues to join Breitenfeldt as the lone other driver to finish in the top five in  all five features this year… Schoone finished third in the feature and now has top-three feature finishes in all four features she has  raced this year… Rookie Brandon Sischo has improved his feature results every week and posted his best finish to date by coming  in fifth… Female drivers won three of the five contested races on July 1, with Schoone and Kendra Baumann taking heat races and  Makayla Last winning the semi-feature, her first-ever semi win… Heat wins by Baumann, Schoone and Strachota brought the list of  race winners in the class this season up to 13 different drivers.

Mini Mod Notes: George Seliger was hooked up all night and won his third feature of the season, taking to the outside to pass Kevin  Tessmer on lap 14 and winning the 25-lap race by a full straightaway last time out on July 1… Seliger got past Snappy Joe Kuehn in  the point standings for the first time this season and is looking for his fourth championship in the class after winning three straight  from 2016-18… Tessmer’s runner-up finish was his best of the season and came two weeks after his car hit the second turn wall  nose-first hard, requiring significant repairs to the front end of the car… Tessmer and Gary Garand won heat races, making it six differ-ent winners in eight heat races this season… Evan Call finally got on track for racing action after showing up most nights but fighting  mechanical issues all season, and he finished ninth in the feature… Fourteen cars have raced in the class this season and 13 were  on hand last time out, with all but Brian Marquardt racing.

This week in State Park Speedway history: July 18, 1965: Dave Marcis was a triple winner at the track then known as Wausau  Speedway, winning the fast dash, his heat and then the feature after overtaking  Bob Dalsky for the top spot on the 13th lap. Neil Callahan of Merrill won the semi feature and heat winners also included Callahan and Roger Ress of Rozellville.

July 15, 1993: 17-year old Pat Tushoski won his second-ever late model feature  at SPS, taking the win just over a week after the death of his mother Peg. Bobby  Stolze finished second with Kevin Peterson third. Doug Drost outlasted Lyle Nowak  in a battle of car No. 32s to win the sportsman feature, while Ken Abraham of  Wausau won his fourth feature of the season in the bomber class.

The Dave Lashua Memorial race started in 2017 in honor of a  veteran racer who competed at State Park Speedway for many  years, most recently in the pure stock division and before that  also in a late model. A member of a longtime racing family,

Dave was a well-liked and highly respected racer known for  helping others on and off the track. He passed away in Dec.  2016 at the age of 47 and is greatly missed. 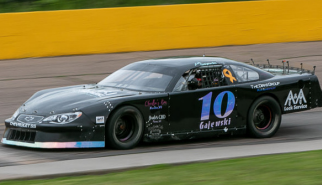 Occupation: Student, moving into my senior year at Mara

Currently in my rookie year of super late model racing.

(Noah also began his racing career in 2018, just after turn

ing 14, racing the final few weeks of the season at SPS in

Auto Service; Jerry Wix “The CEO”, and Knock MS Out of the

How did you get your car number? My car number has never been set in stone. I personally chose what was easiest and based it off  of my birthday (Aug. 10). And have stuck with it ever since.

When/how did you get into racing? I have been into racing my entire life, watching Jeremy Lepak as a toddler and my sister (Mariah)  when I was in middle school. I have always been around the sport. I have had family on both sides of my family race, which influenced me  a lot!

What do you enjoy most about State Park Speedway? I really enjoy the atmosphere the whole facility brings. Whether it comes to  the fans, other racers, or the owners everyone is willing to talk, and create many memories.

Like others we’ve featured in these profiles, your family name is another familiar over many years at State Park. Who are  some relatives who have raced? Oh jeez, let’s see: Laura Heise (aunt), Holly Buchberger (cousin), Alex Volm (cousin), Pat Gajewski  (dad), Mariah Gajewski (sister), Brad-Matt-M.G. Gajewski (cousins), Randy Buchberger (uncle), Mike Gajewski (uncle), I’m sure there are  many more who I don’t even know.

Any career racing goals you have? I’m not quite sure if I have any goals. When I was younger and thought money grew on a tree I had  so many goals set for my racing career. However in all reality the way the sport is evolving, many goals are hard to reach for a 16-year old  with limited funding. My crew and I come to the track setting little goals here and there to keep us accountable for the progress we are  attempting to make.

What has it been like jumping from mini mods to late model? In all reality it has been one heck of an experience. From needing  a whole lot more seat time, to putting in a lot more hours in the shop. Late model racing has been so interesting to learn. One key thing,  you are racing with guys who respect each other’s equipment.

Favorite leisure activities besides racing: Well activities outside of racing are hard to come by when you are working on the car con stantly, however when I’m not I just like to go spend time with friends, and all my little cousins.