The Wausau School District will ask voters in April to approve a proposal that would raise $119.8 million to address district-wide facility needs.

After a somewhat contentious discussion, the Wausau School District Board of Education on Monday approved the referendum question, which will now appear on the April 5 ballot. The final proposal reflects a roughly one-third reduction from the initial proposal considered.

The revised plan eliminates most proposals for elementary schools, except for safety and security features such as adding new entrance canopies, new parking lots and upgrading fire alarm systems. The approved plan also retains adding six classrooms at Stettin, seven at South Mountain and two at Riverview Elementary. Both Stettin and South Mountain, on the western side of the district, have seen an increase in students due to population shifts, officials said. 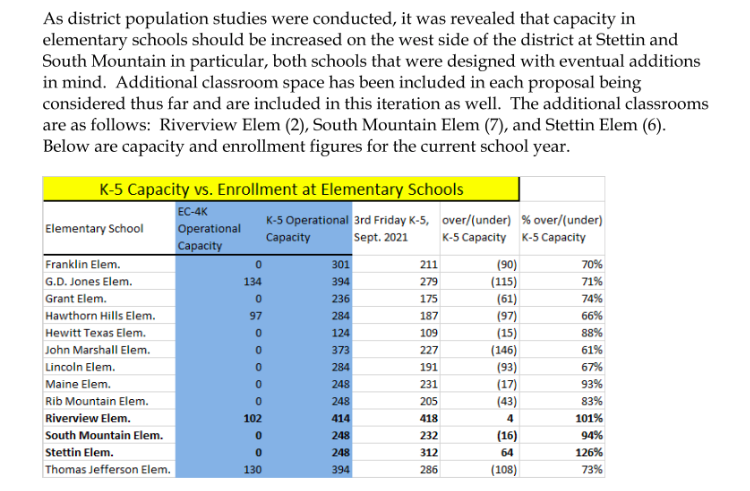 In a statement, administrators said that the nearly $120 million referendum would “lower the tax levy, while at the same time allow the district to address its most pressing facility needs.”

The statement added: “An approved referendum would have an estimated property tax impact of negative $0.43 on every $1,000 of property value in the school district. The owner of a home valued at $150,000 would see an annual tax reduction of about $64.50.”

The district designed the revised proposal after some board members on Jan. 10 expressed concern over the price tag as well as some items being proposed. Two previous referendums on the district’s facility needs failed.

The board passed resolutions on the issue by a margin of 8-1, with member Ka Lo voting against on each.

There was some discussion on how two new field turfs at Wausau West and Wausau East High Schools should be addressed. The proposal has drawn some backlash from board members and the district community.

Lo, who is against the turf improvements being proposed, suggested they should be clearly mentioned so constituents know what they are voting for. Board Vice President James Bouche also pressed for details.

The revised facility needs proposal, a sharp decrease from the $181.9 million plan presented to the WSD Board on Dec. 20, reflects several changes proposed by Lance Trollop. He suggested dropping plans for separate gyms and cafeterias in elementary schools but retaining safety and security features, reasoning that doing so would improve the referendum’s passing. Trollop said the revised proposal was primarily a plan for secondary schools.

In making the adjustments and reductions, district officials also paid attention to requests by Karen Vandenberg and Jon Creisher, who have consistently opposed any huge investment in elementary schools. Both have argued such investments would be a waste given that some schools would likely be merged in the future due to the demographic shift to the west and different classroom capacity in elementary schools. The district is not currently considering elementary school consolidation, citing objections from the community.

Vandenberg praised the revised plan, and so did Creisher, Cody Nikolai and Lee Webster. Almost all board members expressed their appreciation to administrators for coming up with a proposal that addressed “priority needs.”

Member Jane Rusch, who supported the revised proposal, said she was not satisfied with the cuts to elementary schools. That drew agreement from Trollop, Creisher and Nikolai.

Lo objected to cuts for Lincoln and Grant schools, accusing officials of discriminating against facilities located in low-income and minority-neighborhoods. She pointed specifically to Lincoln Elementary, where many children are Hmong. Under the new proposal, Lincoln’s portion of spending went from roughly $9.3 million to $214,000 and Grant’s funding decreased from roughly $11.74 million to just over $2 million.

“Why should a parent or someone who is living by Grant and Lincoln be paying the same to get less and a parent living in another part of the district paying the same and getting more for their kids,” said Lo. “I really wished it had been equal all across the board and it is not.”

Board President Pat McKee said that Lincoln and Grant would receive more money per student than other elementary schools. Stettin and South Mountain have higher costs because of the population growth, he added.

“On average we are spending $6,160 per student at those two schools (Grant and Lincoln) with this referendum,” McKee said. “If you look at Rib Mountain, Maine, with the two referenced and Hewitt-Texas, we are spending an average of $866.” Lo acknowledged the figures, but added that Lincoln and Grant were losing out on renovation which would add to the student learning experience.

But McKee said school officials are not playing favorites. After the referendum question on the revised proposal was approved, McKee said the plan represents a good and fair and a balance between the needs of the school district and taxpayers.

To view the Dec. 20 proposal, click on the second PDF file under agenda item No. V: ‘Wausau Referendum Presentation Revised 12.17.21’.

To watch the video of the meeting, click here.)