This week’s show includes post-race fireworks, and the 5th annual Dave Lashua Memorial for pure stocks has also been rescheduled for Thursday after being rained out last week. Super late models, mini mods and mini stocks also will be racing.

Super Late Model Notes: Justin Mondeik (at right) recorded a double-double two weeks ago, winning his second straight feature  this season and also taking the Flip Merwin Memorial for the 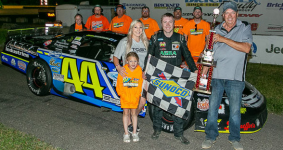 in the 75-lap feature… With the win Mondeik, the defending SPS

super late model champion, nudged ahead of Brock Heinrich by

a point in the point standings after Heinrich finished second in

the feature… Jeremy Lepak had his second straight solid night

this season, finishing third in the feature after setting fast time on

to finish in the top five in all four features so far this season.

Pure Stock Notes: Butchie Schramm became the third different feature winner in three races this year, edging Mitch Stankowski  for the win two weeks ago. The three-time defending champion in the class has had some bad luck early in the season but still  is right in the middle of a cluster at the top of the standings where the top four drivers are separated by a total of nine points…  Stankowski has back-to-back second-place feature finishes and also set fast time for the third time this season. He just missed a  clean sweep of the night after also winning the second heat race… Brett Breitenfeldt picked up his first-ever win in the class, taking  the first heat… Brian Lashua raced for the first time last week in a car familiar to SPS race fans. He is the brother of the late Dave  Lashua, who raced at the track for many years but passed away in 2016. Brian is driving Dave’s former car with the familiar Lashua  No. 01.

Mini Stock Notes: Eric Breitenfeldt continued to be the man to beat in the mini stocks two weeks ago, becoming the first three time feature winner at State Park Speedway this year when he won both feature races in the class, including the Flip Merwin Memoial feature plus the makeup of a rained out race from June 10th. He received one of his toughest challenges of the year in the first  race, finally prevailing after a side-by-side battle with Ashley Schoone, and then got to the front early and cruised to win the second  feature… Defending class champion Garret Strachota joins Breitenfeldt as the lone drivers to finish in the top 5 in all four features

this season… Schoone had her best night of the season at State Park, with two top-3 finishes in features including a runner-up in  the first feature… Brad Abt joined Breitenfeldt as a double-winner on the night, taking the second heat as well as the semi-feature,  his second win in the semi this season… Joey Blaschka picked up his first-ever win at SPS last week, taking the first heat… Tom  Lecher remained undefeated in qualifying this season, setting fast time for the third time this season… A total of 29 mini stocks  have at least qualified on a race night this season, and ten of those 29 already have a win in either a heat race, semi-feature or  feature. Abt, Breitenfeldt and Chris Boykins are tied for the most race wins with three wins each.

Mini Mod Notes: George Seliger became the first two-time winner in the mini mods, holding off Snappy Joe Kuehn and a hard-charg-ing Kole Ferge at the end of the 20-lap feature… Kuehn maintained the points lead after a third-place feature run and setting fast  time for the second time this year, and he has feature finishes of first, second and third this season… The points battle early on is a  two-driver race, with Kuehn and Seliger just three points apart and the nearest challenger 48 points back of Seliger in second… Gary  Garand has joined Kuehn and Seliger as the three drivers who have finished in the top five all three features this year, and Garand did  so last week after arriving to the track late and missing qualifying… Jimmer Lietz won the second heat last week, his second heat win  of the season, tying him with Seliger for most heat victories in the class early on.

Bandolero Notes: The first Bandolero feature of the season went to Alex Hartwig, who went from 10th to first in four laps and rolled  to the 12-lap feature win, his sixth straight in the class going back to last season… Cohen Henze, who travels up from the southern  portion of Wisconsin southwest of Janesville and near the state border, finished second in the feature for his best-ever feature finish at State Park Speedway… Anna Malouf won the second heat last week, her first race win at State Park since the 2019 season… Jackson Kottschade made his second trip to SPS and first since the Bandos’ opener last season. Both times his night started the same,  winning the first heat, including doing so last week… Another name and number familiar to SPS joined the class last week as Oliver  Weinkauf made his Bandolero debut at the track. He is the son of super late model driver Jason Weinkauf and races with the same  No. 76 as his dad.

June 27, 1974: Dave Field of Port Edwards came from well back in the field to win the 25-lap late model feature in his 1968 Ford Mus tang convertible. Rick Haase won the semi-feature in his first appearance of the season at the track, and the hobby stock class compet ed with Al Buchkowski of Hatley and Ringle’s Gerry Marquardt winning heat races. 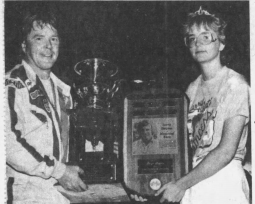 rial, defending his title from the inaugural race the season before. Marv

features, but Trickle finished second in the opener and third in the second

feature to clinch the night’s overall points title. Wayne Lodholz also was a

double-winner on the night, taking the semi-feature and second heat race.

Perry Redeker came out on top in the one-on-one spectator races.

a restart with 12 laps left and went on to win the 50-lap late model feature,

Schramm won the feature in the old pure stock class.

One year ago: Mark Mackesy held off nephew Dillon Mackesy to win the

one-hour rain delay midway through the race program. Another family 1-2

Dick Trickle won the 2nd Larry Detjens Memorial in 1982,  and is joined by Margo Detjens (now Mackesy), daughter of  Larry Detjens after for this Wausau Daily Herald photo.

The Dave Lashua Memorial race started in 2017 in honor  of the veteran racer who competed at State Park Speedway  for many years, most recently in the pure stock division and  before that also in a late model. A member of a longtime rac ing family, Dave was a well-liked and highly respected racer  known for helping others or taking his car to show at events  all around the area. He is greatly missed. The main event of  the memorial in his name is the pure stock feature, which has  been won by Alex Volm the last two years. 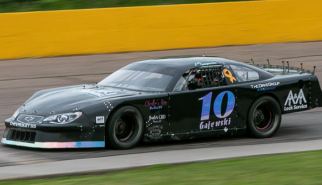 Currently in my rookie year of super late model racing.

(Noah also began his racing career in 2018, just after turn

ing 14, racing the final few weeks of the season at SPS in

Auto Service; Jerry Wix “The CEO”, and Knock MS Out of the

How did you get your car number? My car number has never been set in stone. I personally chose what was easiest and based it off  of my birthday (Aug. 10). And have stuck with it ever since.

When/how did you get into racing? I have been into racing my entire life, watching Jeremy Lepak as a toddler and my sister (Mariah)  when I was in middle school. I have always been around the sport. I have had family on both sides of my family race, which influenced me  a lot!

What do you enjoy most about State Park Speedway? I really enjoy the atmosphere the whole facility brings. Whether it comes to  the fans, other racers, or the owners everyone is willing to talk, and create many memories.

Like others we’ve featured in these profiles, your family name is another familiar over many years at State Park. Who are  some relatives who have raced? Oh jeez, let’s see: Laura Heise (aunt), Holly Buchberger (cousin), Alex Volm (cousin), Pat Gajewski  (dad), Mariah Gajewski (sister), Brad-Matt-M.G. Gajewski (cousins), Randy Buchberger (uncle), Mike Gajewski (uncle), I’m sure there are  many more who I don’t even know.

Any career racing goals you have? I’m not quite sure if I have any goals. When I was younger and thought money grew on a tree I had  so many goals set for my racing career. However in all reality the way the sport is evolving, many goals are hard to reach for a 16-year old  with limited funding. My crew and I come to the track setting little goals here and there to keep us accountable for the progress we are  attempting to make.

What has it been like jumping from mini mods to late model? In all reality it has been one heck of an experience. From needing  a whole lot more seat time, to putting in a lot more hours in the shop. Late model racing has been so interesting to learn. One key thing,  you are racing with guys who respect each other’s equipment.

Favorite leisure activities besides racing: Well activities outside of racing are hard to come by when you are working on the car con stantly, however when I’m not I just like to go spend time with friends, and all my little cousins. 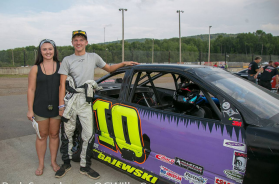 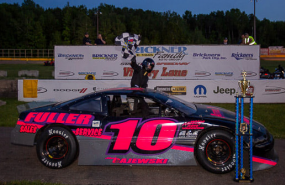 Noah after a feature win last year in the mini mod class Noah with his first mini stock car in 2018, joined by sister Mariah,  a former mini stock track champion herself at State Park.