With the highly infectious Delta variant of the novel coronavirus spreading rapidly across the country and vaccination rates stalling, state officials on Thursday urged people to get vaccinated ahead of the upcoming school year.

People who are 12 years and older are currently eligible for the vaccine, which is widely available locally and is offered at no charge. Yet, only 46.6% of residents of Marathon County and 49% of Wausau city residents have received at least one dose. The state and national figures as of Thursday afternoon are at 51.3% and 56.4%, respectively. 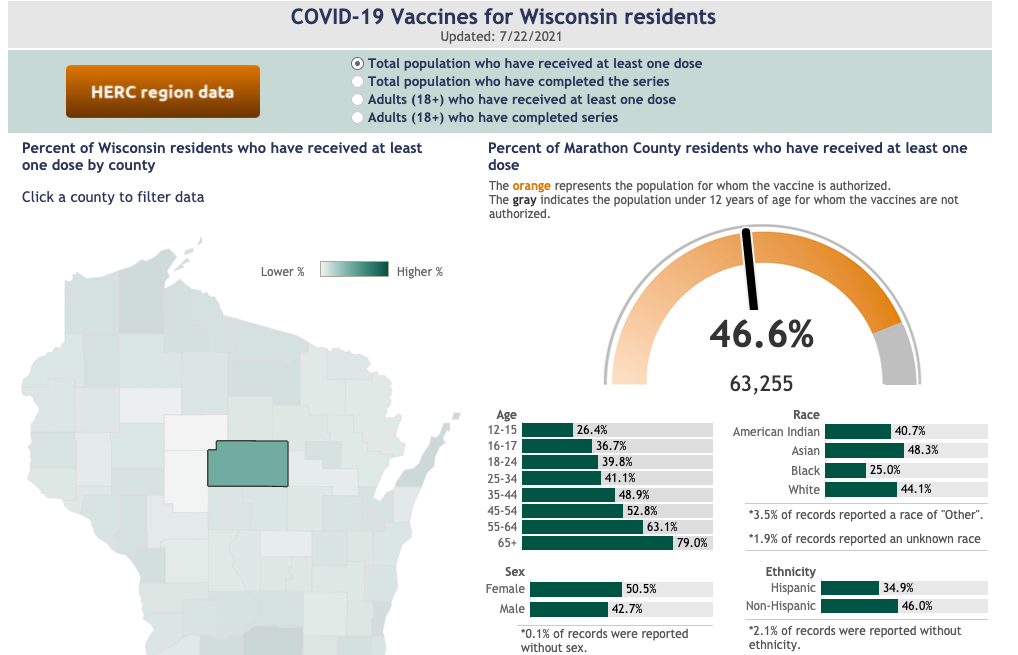 The disparity is starker when it comes to vaccination rates by race and ethnicity. State Department of Health Services data show Asians lead other racial groups, though fewer than 50 percent have received the vaccine. The break-up in Marathon County is Asians – including Hmong – at 48.3%, Whites 44.1%, and American Indians at 40.7%. Blacks have the lowest rate, at 25%. The ethnicity break-up shows Hispanics at 35% and non-Hispanics at 46%.

The picture is not much different at the state-level when it comes to Covid-19 cases, hospitalizations, and deaths among communities of color.

Tony Gonzalez, of the Hmong & Hispanic Communication Network (H2N), pinned the current rate of vaccination among those in the Hispanic community to “lack of trust, myths in community and language barriers.”

“There is a lot of misinformation out there in the communities,” Gonzalez, who is Hispanic Community Coordinator for H2N, a program of Wisconsin Institute for Public Policy and Service (WIPPS), University of Wisconsin System. “That misinformation adds to fear, leading to vaccine hesitancy.”

When asked for the sources of misinformation, Gonzalez pointed to “myths in the community about the vaccine, that it would alter the DNA, or turn people into zombies” but also to deliberate information by some business and farm owners in Marathon and Lincoln counties.

“There’s a farm owner with far-right views who has said it is a sham virus and doesn’t really exist, making people refuse the vaccines,” Gonzalez added, declining to name the owner.

This tracks with developments elsewhere in the country where far-right figures and a number of elected Republicans – both at the state and national levels – have spread skepticism about the vaccines, which the nation’s top health officials and researchers have termed “safe” and “life-saving.”

Another factor for the current rate of vaccination, Gonzalez said, is the undocumented status of a number of people in the Hispanic community, many of whom work in farms in Marathon county and elsewhere in the Badger state. “They hesitate to go to vaccine centers for fear of being arrested and also many still don’t know the vaccines are free.”

However, the H2N Hispanic coordinator said their outreach to communities is bearing fruit and more and more are willing to take the vaccines.

At least 44% of Hmong have been vaccinated, according to officials at the Hmong American Center in Wausau. Wausau Pilot & Review has not been able to verify these figures. Yee Leng Xiong said last month he considered the number to be “a huge success” because it was higher than other communities in the county. He did not respond to questions regarding updates.

On Thursday, officials from the state Department of Health Services urged people in the state to get vaccinated in light of the rapidly surging Delta variant of the coronavirus which is more infectious than the strains known thus far.

“Our 7-day average of confirmed cases here in Wisconsin is 242 cases per day which is 2.8 times higher than where we were two weeks ago when our 7-day average was 85 cases per day,” said DHS Deputy Secretary Julie Willems Van Dijk during a virtual media briefing on Thursday.

Citing the Director of Centers of Disease Control and Prevention (CDC), Dr. RochelleWalensky, Willems Van Dijk said the Delta variant now accounted for 83% of current U.S. cases and that the state lab of hygiene was reporting the same sequencing.

The Delta variant is extremely infectious and will spread even more quickly than any form of the virus seen to date, she said. “And it will spread most effectively to those who are not vaccinated.”

“Over the past two weeks, we have seen Wisconsin hospitalizations rise from 74 people across the state to 143 reported yesterday, almost double the patients,” Willems Van Dijk said. “Nearly all of these patients could have avoided this fate if they had been vaccinated.”

Data shows nearly all of the hospitalizations and deaths are among those who are not vaccinated, prompting experts to call it “a pandemic of the unvaccinated.”

“Many  received incorrect information about the vaccines from social media or friends and family members who are also informed by errant sources,” she said.

She also cited a widely read account of a doctor in Alabama – reported by AL.com – who spoke of unvaccinated Covid-19 patients begging her to give them vaccines.

“We have said it before and we will say it again,” said Willems Van Dijk. “Every Covid-19 death is now a preventable death.”