The Wausau School District is proposing two new multi-million dollar athletic facilities, a project intended to boost its public image after a dismal rating by school staff and a massive increase in negative stories in the media in the past year.

The survey, distributed in April and May, does not spare the WSD administration, but is especially low in assessing the Wausau School Board. According to district documents, the average favorability score on whether the school board presents a “positive image to our community” rating dropped precipitously from the 2019-20 to the 2020-21 survey. Out of a maximum score of 5, the board received a 4.01 rating in the 2019-20 survey. That rating plummeted to 2.77 in the most recent review.

To address the adverse rating, Superintendent Keith Hilts on June 28 suggested that a “high impact project” on which to focus could turn public opinion around.

On Monday, Hilts presented a proposal for the indoor athletic facilities as a potential project to burnish the district’s battered image.

But the project appears to show a sharp disconnect between staff and administration priorities, according to the survey results. Among the highest five priorities the staff were asked to list, they mentioned providing additional intervention/support services for struggling students (69% of the staff) as a top priority, followed by better preparing students for life after high school, providing additional counseling, psychologist and social work services, developing innovative programs to improve student learning  and increase the number of hands-on/project-based learning opportunities.

Parents, too, listed supporting struggling students as their top priority in their survey.

But Hilts and top district officials, instead, chose something that appears way down the list of priorities – athletics, which landed at number 11 out of 14 on the priority list with just 19% of staff indicating support. Even the tax increase survey from 2019 that Hilts cited in his presentation to the Board shows an athletics facility at the lowest of the seven items, at 55% in favor and 42% opposed. That number was also the highest in opposition compared to the other seven subjects. Classroom additions with growth and safety and security attracted the most support, both showing 75% of respondents in favor. 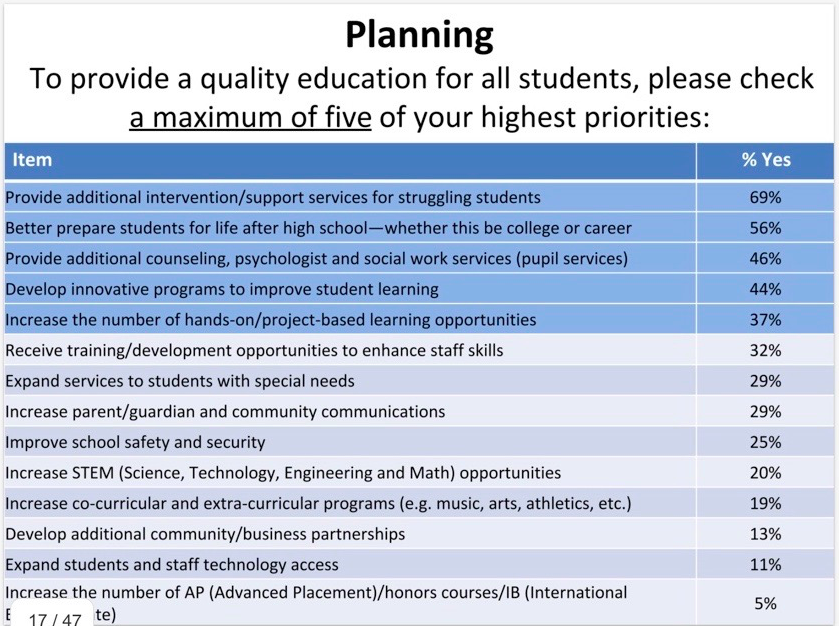 The WSD proposal includes building two 60,000 square-foot buildings with indoor surfaces to accommodate the athletics, curricular and co-curricular needs of students from both Wausau East and West High Schools. One proposal calls for an air-supported dome with an artificial turf soccer field and four-lane track similar to one that the Rhinelander School District unveiled earlier this year. The total project budget would be between $5-7 million. A metal building being proposed would contain a 36,000-square-foot practice center with turf at a budget of between $7-21 million, depending on the size of the turf field.

“Board members expressed an interest in some sort of project that would offer some positive impact for the students and staff and the community,” said Hilts, during his presentation. Hilts added that of the project ideas put forward, two – some preschool age event and athletics – generated the most interest, though he did not elaborate on details.

The presentation and discussion that followed was heavily focused on athletics facilities.

Hilts then invited principals and athletics directors of Wausau East and Wausau West High to share “the vision, the plan, the whole dream.”

West Principal Jeb Steckbauer said school officials have been having the conversation regarding athletics facilities “for quite some time.” He added that some parents have shown interest in the project. East Principal Cale Bushman said what separates schools is how many additional things – besides academics – they can offer, like music band, theater and athletics, which attracts children and their parents.

Likewise, athletics director for West, Brian Miller, said an indoor facility could not only meet the different needs of the students from East and West but also host some other co-curricular organizations and curricular programs.

Kurt Vandeheuvel, athletics director for East, said different facilities could help hold sports all across the board, and the schools could share those facilities and foster a spirit of unity.

School officials also said having indoor facilities could prevent sports activities from being impacted by adverse weather or seasons.

Board member Jon Creisher said he would be interested in long-term projects that are completed, and not in any half measures.

“There is a lot of interest in the community to do this,” Creisher said, adding that surrounding school districts were “beating us to the punch.” He also said some students are leaving the school district for some of these reasons and noting that these new facilities could generate revenue by hosting events.

Critics say the district’s obsession with what amounts to an image makeover by offering indoor facilities as community engagement is a tone-deaf response to the challenges they face. Some parents, staff and board members say the proposals represent the wrong priorities during an ongoing pandemic.

“The tremendous disconnect by both the board and Hilts shows in their energy about the sports arena proposal amid the newest Covid surge and is also apparent in their skirting of the staff and parent survey responses,” a WSD educator told Wausau Pilot & Review, requesting her identity be not revealed to avoid possible blowback by school officials. “The whole sports idea arose out of Pat McKee’s concern about the low ratings of the board.”

McKee is the president of the WSD Board.

WSD Board member Jane Rusch also questioned the rationale behind the proposal.

“As for the choice of the athletic domes I would send you to Dr. Hilts to explain it,” Rusch told Wausau Pilot & Review. “I don’t truly understand the reasoning myself.”

Dr. Hilts did not respond to requests for comment by press time.